Making a gif can be difficult if you don’t know what you’re doing, but if you do it is a pretty quick process.  The first thing you need to do is finding the clip you want to use, on youtube for example.  Next you need to download the video clip using a website like keepvid.com or clipconverter.cc.  Next, you need to trim the clip down using a software such as mpeg streamclip.  This is as simple as playing the video until you want your gif to start and clicking “in”, then once your gif part ends click “out” and finally click “trim”.  Next save the clip to other formats, you change the drop down bar to image sequence and the frame rate of 12.  Next you’ll need the program Gimp.  Once its open, click open as layers, and open all the images you saved from the image sequence of your clip.  Finally, again in the file menu, clip export and save the file as a .gif.  When the pop up comes up, check the as animation box. Now you’ve got a gif!

The other day we read an article on copyright and fair use.  That topic came up in an episode of Shark Tank I was watching the other day.  One guy had a clothing company and the big thing it had was a pocket for your mp3 player and it had a little hole for your headphones for convenience.  While this episode was not new, it still appeared to me, and the sharks, that this was not a new idea.  The owner of the company then revealed that he had a patent for this technology and every other company who had incorporated this idea into their clothing had infringed on it.  This blew the sharks away because of how valuable this patent could be, and there were two drastic reactions on either end of the spectrum.  Mark Cuban was furious with this, he proclaimed that one of the things he hates about the world of business are patents like this that people often accidentally infringe on, which allows the patent owner to sue and make a lot of money off of.  He explained that he hates that people create patents like that with suing as the primary plan, not to run an honest business better than the other person.  Kevin O’Leary then responded with his approval of the patent idea.  He said that “thats how the world works” and that making money is making money.  He and Cuban went back and forth with each other, with Cuban ending up very angry and O’Leary and the business owner.  This just comes across to me as the two farthest ends of the copyright spectrum and I thought it was interesting to see how two billionaire businessmen view the way copyright laws work, because I know many people hate it just as much as Cuban.

…to the home of HIST 428: Adventures in Digital History for Spring 2014 with Jeffrey McClurken.  This senior seminar at the University of Mary Washington counts for history, Museum Studies, and Digital Studies.

112000 views in 3 months, someone try to top that with their final project

This was without a doubt the funnest final project I’ve ever had to do.  I loved the freedom we had, it really allowed us to express our own creativity.  Although it took a lot of time and effort, it was so much more enjoyable than a normal final project or test.  It was interesting to me because normally I dread final projects, and put them off until the last minute because I really just don’t want to start them, but this one I was excited about, and had fun with so it really did not seem much like work at all.  The First assignment that I chose to do was my own creation, since my theme was the tv show “Pawn Stars” (please ignoree wikipedia asking for money), and because that is a family business, I figured that I would remix the introduction theme song to use my family.  I thought it was a cool first assignment to do since it’s the intro to the show so i thought it would make a good introduction to my project.  I used iMovie to create this, I downloaded the theme song music, and played it behind me speaking as Rick does in the show, and I used pictures of my family.

The next assignment I chose to do was the audio assignment ds106 rap.  I really liked the idea of doing a pawn stars commercial, so I thought this would be an ideal chance to make one.  Since its audio instead of video, it’s probably a better radio commercial, but I like how it turned out nevertheless.  Without further adieu, take a look at the first single released by Lil’ Eric.  Certified platinum material, I know.  I used audacity to complete this assignment, it wasn’t very difficult, but it was enjoyable none-the-less.

The third assignment I chose to do was the video assignment joining the conversation.  I find this clown hysterical, he comes into the shop selling Pez, expecting thousands of dollars for it.  The fact that he is so insulted and his great accent make it even better.  I thought that this episode was absolutely perfect for me to voice the guys because I imagine myself just slapping the guy for even being serious about it.  His track suit and fedora just top it off.  I used iMovie for this one too, I downloaded the episode from youtube, then cut the scene up into bits that Tracksuitman (hes gotta be a Mets fan, just from the accent) was speaking, and that Chumlee and Cory spoke.  In the parts where Chum and Cory were speaking, I deleted the sound, then voiced over them.  I think the audio sync turned out pretty well for this one.  ”Its an insult to the Pez community! Those chooches!” lol.

In the show, Rick often calls in an expert when he is unsure of the value or authenticity of an item.  For this assignment, I chose to do the video assignment modern marvels with kind of a twist.  I took the place of an expert that Rick was talking to.  I sold knives over the summer (real cool, I know) so I knew a lot about this particular knife and I figured that it would be a good idea for it.  Of all of the assignments, this is probably the one I am the least happy with, but the experts are such an important part of the show, I thought it would be a good idea to include them in my project, and this gave me a good opportunity to do so.  All of the experts introduce themselves in the same way “Hi, I’m (Sean Rich, Mark, Dana, etc.) and I’m an expert in (Antique arms and armor, I’m the curator of the Las Vegas Museum System, American History, etc.) so I wanted to use the same format.

As somewhat of a conclusion, I chose to use the video assignment ds106 fave moments.  I made a video montage of my top 5 favorite pawn stars moments, with a mix of actual items and just funny things in the show.  Although I was disappointed that I couldn’t fix the audio sync issues, this is the assignment that I spent the most time on and am most happy about.  I wish I could have had good quality clips for each pick, but unfortunately youtube didn’t have the best options.  That said I am still very happy with how it turned out.  I downloaded each clip from youtube, then used iMovie to cut out some parts and put them all together.

With regards to future ds106 students, I need to stress not to wait until the end of the week (like me) to start the assignments.  Although a few can be completed in a day, the majority can not be, and you will end up with sloppy work.  This is important not only so that you get your work in on time, but if you have trouble, it is much easier to ask for help earlier rather than later.

Make a video of yourself eating something you hate

Take a picture of one of your favorite somethings, playing a sport, watching tv, a special token, whatever it is.

Take a video of someone and see how long you can go without them noticing. (Video) 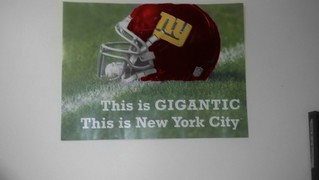 The objective of the assignment “Common Every Day Object” was to take a normal, everyday object and manipulate the colors.  My roommate Tim is a New York Giants fan so I decided to have a little fun at his expense.  The first thing I did was to take a picture of his beloved Giants poster in our room.  Next I imported it to the Color Splash Smart app on my computer.  Color Splash allows you to take all of the color out of an image, then recolor it back.  I used it to first, take all of the color out of the picture, then recolor everything except for the helmet itself.  I then saved the image and imported it to the app Colorstrokes.  Colorstrokes is similar to Color Splash except that it allows you to change the colors of the picture, kind of like paint.  I used color strokes to recolor the normally blue and white helmet to a more suitable red and yellow.  It was a pretty simple task but I had a lot of fun at his expense.